If you have ever been to one of my inspirational talks, concerts or master classes, or had me produce a record for you, you know that I often say that music is an incredible force for good and has no boundaries and is the closest we mere mortals will ever come to knowing the language of the angels.

The record by "Hats Off Gentlemen It's Adequate" proves this point!

First, the music is compelling if you love Progressives Rock, and honestly, what music fan can't at least respect the genre even if they aren't a devotee?

But, beyond the music, which is good, the story of the band is even more compelling. First, the guys decided to release on their own label "Glass Castle Recordings", a gutsy move and a good one in these days of 360 deals and where much is promised, and little delivered with many of the indie and major labels out there.

The 2017 record from the band was joint winner of Beastie's Rock Show's Album of the Year (along with Alice Cooper and Roger Waters).

Other accolades include: Performing on the main stage at Hard Rock Hell's Prog festival in November 2017. HRH's own magazine described the band as 'unlikely stars who stole the show', and this has since led to a busy schedule of gigs, festivals and interviews.

I liked the music and decided to write this post so I contacted the band to learn more about who they are and what they are up to. I was chatting with Malcolm Galloway about the record and how much I loved it, but that I really would love the chance to produce a record for them as I could bring the sound recording up to the next level for them and also assist with making the keys the songs were written and recorded in more diverse, as the sound quality is good but not great and some of the particular keys were over used (really the only minor flaws in an otherwise masterful musical creation). In other words, I loved their music so much that I wanted to be their producer. Well, let me say that I met a kindred spirit in Malcolm as he has also faced some major health challenges just like I have. As you probably know, I am blind and a brain tumor survivor. I was so impressed when I found out how Malcolm did most of the technical work on the bands offerings.

"I've got a spinal problem (Ehlers-Danlos Syndrome), which makes working largely lying down with the laptop on my chest a pragmatic compromise," says Malcolm.

This means that all the great mixing and recording is done at home for the most part. 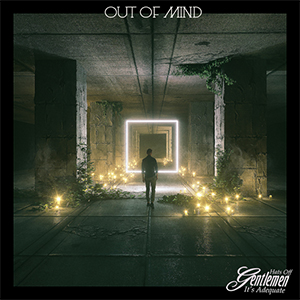 Makes me wonder how Malcolm has time for music—but what a life warrior!!!

"Hats Off Gentlemen It's Adequate is a proggy, funky, defiant and sometimes poignant London, UK based rock band, recommended by Steve Hackett (Genesis). Our 4th album will be 'Out Of Mind'."

The first single release from the album is the double A-side "Stand Up b/w When I Was A Ship".

The album will be released in digital formats on 30 November 2018 and released as a physical CD on 25 January 2019. It is available as a pre-release Bandcamp digital download or signed CD now.

'Out Of Mind', Hats Off Gentlemen It's Adequate's fourth album, is inspired by memory, from a variety of perspectives. It starts with 'Coming Back', inspired by Philp K Dick (PKD)'s novel Time Out Of Joint. Track 11 (The Electric Ant) is also based on a PKD story.

The last conscious entity drifting towards the heat death of the universe reflects on the inevitable loss of memory as it disintegrates in 'I Miss The Stars'.

'Losing myself' is from the perspective of someone trapped in a mind degenerating due to dementia.

'When I Was A Ship' is inspired by Ann Leckie's 'Imperial Radch' science-fiction novel series.

'De Humani Corporis Fabrica' (on the fabric of the human body) was the title of Andreas Vesalius's ground-breaking anatomy book.

'Stand Up' is about those who rewrite history to promote hatred.

The last track of the album is 'Lidice'. Named after the Czech mining village destroyed by the Nazis, murdering 88 children and 252 adults. They wanted the village to be wiped from history. In response to the worst acts of inhumanity, we sometimes find the best of humanity. A group of coal miners in a mining village in Staffordshire, led by their local doctor, Barnett Stross, set up the organisation Lidice Shall Live. The community donated a day's wage each week to fund the rebuilding of the village after the war. Hitler wanted the name Lidice to be forgotten - he failed. This song is dedicated to the memory of all those who have been killed because of their origins, and all those who stood in solidarity.

For excessively detailed information about the songs and lyrics, please visit  www.hatsoffgentlemen.com/outofmind

I am so glad I had the opportunity to learn about this band and their music and I highly recommend you give them a few minutes of your own time!

Read 2515 times
Tweet
Published in Blog
More in this category: « Ted Hajnasiewicz's "This Is What I Do" CD (December 13, 2018) Don't believe the hype, there is no substitute for a properly registered Copyright with the Library Of Congress! (December 10, 2018) »
back to top